Child custody determination in Scottsdale refers to the responsibility for making major decisions regarding a child’s upbringing, care, and welfare. When legal custody is split between both of a child’s parents, joint custody has been granted. If, however, legal custody is granted only to one parent, that parent will have primary or sole custody of the child.

Although Arizona laws and courts do not favor one type of custody over another and they are not supposed to make custody decisions based on parents’ gender, custody issues and cases can still be complicated and contentious. As a result, having an experienced attorney – like Scottsdale Custody Lawyer Karen A. Schoenau – on your side and advocating for your rights can be critical to favorably resolving joint custody versus primary custody disputes in Arizona.

Ideally, divorcing parents will agree about how custody and related issues are to be resolved. This, however, is not always possible, and when parents cannot agree on joint custody versus primary custody, it will be up to the family courts to step in and resolve the matter. 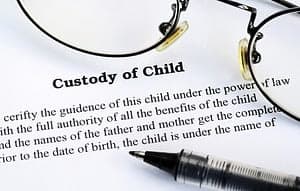 When making decisions regarding child custody determination in Scottsdale, the single most important factor the courts will consider is what is in the best interests of the involved child(ren). In this regard, some of the more specific factors that may be considered can include:

Joint Custody Versus Primary Custody: Other Considerations in Arizona

Once a court issues a ruling regarding child custody determination in Scottsdale, here is what parents should be aware of:

Consult with a Scottsdale Child Custody Determination Attorney at the Law Office of Karen A. Schoenau

Do you need help resolving any custody-related issues in Arizona? If so, you can trust Scottsdale Custody Attorney Karen Schoenau for experienced help, honest answers and effective representation. Since 1987, Karen Schoenau has been committed to helping people favorably resolve their sensitive family law matters, including complex cases related to custody and divorce.

To receive professional advice and learn more about your best options for resolving your custody case, schedule an initial consultation with Attorney Karen Schoenau. You can set up this meeting by calling 480-209-1918 or by emailing us using the contact form.

From her offices based in Scottsdale, Attorney Karen Schoenau represents clients throughout the metropolitan Phoenix area and the state of Arizona, including Scottsdale, Mesa, Surprise, Maricopa County, Pinal County, and Gila County.