At the Law Office of Karen A. Schoenau, our Phoenix and Scottsdale child custody attorney is dedicated to protecting the rights of parents and their children. We apply our in-depth knowledge of the law along with forceful advocacy to help you achieve the best possible results in any number of custody or visitation matters.

Types of Child Custody Cases We Handle in Phoenix and Scottsdale, AZ

Our Scottsdale divorce lawyer has the skill and experience to handle nearly any type of custody issue, including:

If you don’t see the child custody issue on this list, rest assured, the Scottsdale child custody attorney at the Law Office of Karen A. Schoenau can handle it for you. There’s no worse feeling than having to fight for custody of your child after you’ve been such a large part of their life. Let our family law attorney examine your situation, build a case, and fight for your right to custody in the Arizona court system.

How Is Child Custody Determined in Arizona?

When it comes to custody, Arizona divorce law is gender neutral, that is, it favors neither fathers nor mothers. Based on Arizona child custody laws, court orders will usually give parents either joint legal custody or sole legal custody of a child. They may also make decisions regarding visitation or parenting time with the child.

The courts take a number of factors into account when making a custody determination. These factors include looking at which parent has been the child’s primary caretaker and which parent is more likely to help build meaningful relationships between the child and the other parent. The courts will also consider any incidents involving domestic violence or patterns of alcoholism or drug abuse. Evidence of this type of behavior may create a presumption that the parent is not fit to have custody of the child.

The court will also take into account which parent will help the child build meaningful relationships when determining child custody. For example, does one parent have a stronger family than the other? If the mother still has strong relationships with her parents, siblings, and other family members, while the father no longer has family in his life, the court will likely side with the mother when determining custody. The court wants to see that the child will have multiple relationships in their life when custody is awarded.

If there is evidence of domestic violence present in the life of the mother or the father, this will greatly impact the custody decision of the court. This is especially important if the parent has been accused of physically or emotionally harming the child, another child, or the other parent of the child at the center of the custody battle. Our Scottsdale domestic violence lawyer has the experience handling orders of protection and understands domestic violence cases in family law and child custody orders.

Patterns of Alcoholism or Drug Abuse

The court will look for patterns of alcoholism or drug abuse when determining child custody in Scottsdale. If either parent has suffered from alcoholism or drug abuse, the court will often award custody to the parent who is not suffering from addiction. A Scottsdale child custody attorney will be able to help you fight for custody of your child, especially if you are dealing with addiction.

During an Arizona divorce, there are two options for reaching an agreement in a child custody case. You and your spouse can come to an agreement through Scottsdale mediation, an alternative dispute resolution process where a trained third-party mediator guides you through the decision-making process. If you are able to reach an agreement during mediation, you and your spouse have the greatest amount of control over custody arrangements.

You and your spouse could also have a judge oversee your case, review all available pieces of evidence, and issue a final decree that outlines the terms of your divorce. For child custody issues, the court will take the following factors into consideration.

If a child is of suitable age and maturity, the court will also consider his or her preferences when issuing a custody decision. The child must be able to form an intelligent preference on his or her living arrangements, meaning that he or she can provide a reasonable opinion on which parent he or she wants to live with.

For example, if a child bases his or her decision on the quality of toys in the home, the court will not consider this choice to be an intelligent preference. However, if a child tells the court that he or she has a stronger relationship with one parent, the court will likely take this information into consideration.

Ultimately, Arizona courts will issue child custody decisions based on whether or not the arrangement is in the child’s best interest. The child may provide an opinion, but the court does not have to accept it if they do not believe it would be in his or her best interest.

For a child, this can be devastating if they were under the impression that once they gave their opinion to the court it would be accepted. That is why no attorney should ever tell a child that making a statement will increase their chances of living with the parent of their choice. While making a statement to the court is a smart idea for children of certain ages, it does not always lead to the preferred outcome of the child. The Scottsdale child custody attorney at the Law Office of Karen A. Schoenau will be sure your child understands this and prepares them accordingly for their time in front of the judge. 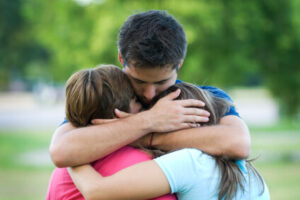 Parenting Time for the Non-Custodial Parent

Arizona courts will award non-custodial parents reasonable parenting time. It is a common parenting plan for a non-custodial parent to receive parenting time every other weekend, every other holiday, and half of vacation and school break time. However, these decisions will vary from case to case. You can trust our experienced team to diligently fight for your parental rights and the best interests of your children.

Once an Arizona family court grants a custody order, that court usually has the continuing power, or jurisdiction, over changes to the order. If you are considering relocation out of Arizona, or if a spouse is contemplating a move, you need to speak with an attorney about potential legal implications. At the Law Office of Karen A. Schoenau, our child custody lawyer can answer any questions you may have, and can also handle any interstate custody disputes.

Be sure to never change your residence to a state other than Arizona without first consulting a Scottsdale child custody attorney. You can avoid legal repercussions by discussing a potential move with an attorney beforehand.

Call for a Consultation With a Scottsdale Child Custody Attorney

If you are involved in a legal matter concerning custody or visitation, our family law firm can help. Contact our Scottsdale child custody lawyer online or call (480) 209-1918 to schedule an initial consultation to discuss your case. Our skilled family law attorneys will guide you through the legal process as quickly and as painlessly as possible.